Cost, Quality, and Value – The Buyer’s Side 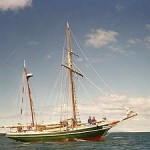 I once owned a partnership in the Sheila Yeates; a gaff-rigged topsail ketch.  She was a beautiful ship, 48 feet on the water line and 65 feet overall, built in Lunenburg, Nova Scotia, and launched in 1976.  The Sheila Yeats sank in the north Atlantic in 1989.

For a long time the Sheila Yeates was fitted with a 1932 Fairbanks Morse six cylinder diesel engine.  A concession to a lack of funds and some romantic notion that fit the image of a traditional sailing vessel, it cost $1500.  It also blew so much diesel smoke that it virtually guaranteed anyone who went below in a sea would heave lunch.  The one consolation was that the 2000-pound engine kept its heat overnight in cold anchorages.

The engine was problematic.  On one crossing under motor-sail, I noticed the oil pressure had dropped to three pounds.  On questioning the captain, he indicated that the manual said it was good down to three pounds.  When I asked if he used detergent oil, he indicated that the manual didn’t mention detergent oil.  The manual had been printed in 1932.  Shortly after that the engine threw a rod.  It kept running however, not having the good sense to quit immediately.

The captain elected to replace the engine with a more modern Perkins Elmer.  He had gotten a deal from the Duluth Votech on a rebuilt engine, never mind that the engine was not a marine engine and had been used for logging.  After spending a good deal of money removing the chart house and installing the newly “rebuilt” engine, the engine ran for two minutes and then seized up.  They swore it had been dynamometer tested.  Another rebuilt engine was eventually installed.  Installing the two engines cost more than a brand new Perkins Elmer marine engine.

So here’s the deal.  There is a difference between cost, quality and value that confuses many people.  Price is what you pay.  Cost includes the price and associated costs of training, maintenance, and so on.  Quality is defined as meeting your specifications.  You can have a high quality Yugo or a low quality BMW.  It depends on your requirements.  If you are vague on your requirements, you might get anything.  Cost doesn’t always equate to quality.

Value is the quality divided by the cost.  If it meets your specs and costs very little then maybe you are getting a value.  Both engines for the Sheila Yeates were low price, and had high costs.  They barely met the requirements.  As a result, the perceived value of a low price did not yield real value.

I see too many marketing executives and even CEOs go right to price when buying new tools.  It might be a sign of the tough economic times.  But the next time you buy a new marketing tool, take time to make sure it’s what you need, or it will wind up costing you more, and you will get very little value.  You’ll wind up heaving your lunch in rough seas.